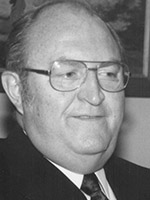 President Robert J. Voss (1926-2012) served as pastor of Faith-Fond du Lac, Wisconsin, and Siloah-Milwaukee before becoming president of Wisconsin Lutheran College, a two-year teacher-training college that shared facilities with Wisconsin LHS from 1960 to 1970. When the synod voted to move all teacher training to New Ulm, Minnesota, in 1969, Pastor Voss became the administrator of the WELS Board for Worker Training. Then, in 1987, he became the sixth president of Northwestern College and served until his retirement in 1993.

President Voss was known as a servant leader who loved his Savior and the college he was called to serve. His love for his Savior was reflected in the devotions he presented in chapel and the enthusiasm with which he approached the teaching of 1 Corinthians. His love for Northwestern College stemmed from his days as a student and as a tutor. He sported “NWC” on his license plate as well as the many plaques and memorabilia in his office and home.

His love for the students could be seen in his friendly smile, approachable demeanor, and open-door policy. He bowled in NWC’s intramural league and regularly attended athletic contests, plays, and concerts. He even participated in a halftime free-throw contest with Dr. Gary Greenfield, the Wisconsin Lutheran College president.

President Voss’s dedication to his Savior and to Northwestern College was also reflected in his commitment and work ethic. His organizational skills and attention to detail served him well as he interacted with faculty and staff and as he strove to balance the needs of Northwestern College with the overall needs of the synod. A phrase from a recruitment video produced during his tenure reflected well the spirit of his presidency: “Because we care!”

Our gratitude to Professor John Schmidt WLS ’74 for contributing to this biography.