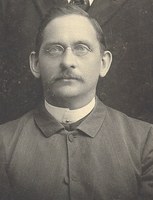 John Schaller (1859-1920) served as the third director, or president, of Dr. Martin Luther College. He was born in St. Louis, Missouri, and educated at Northwestern College-Watertown, Wisconsin, and Concordia Seminary-St. Louis, where his father was one of his professors.

From 1880 to 1881, Schaller served at Immanuel-Alexandria, Virginia, where he met Emma Mumm. John and Emma married in 1883 and had nine children. After graduating from Concordia Seminary, John served congregations in Little Rock, Arkansas, and Cape Girardeau, Missouri, before accepting the call to DMLC’s theological department in 1889.

In 1893 both the synod and DMLC had a rebirth of sorts. The Minnesota, Wisconsin, and Michigan Synods merged into the Joint Synod and repurposed DMLC as the synod’s teacher-training college. DMLC’s theology department closed, but a prep department was retained.

That same year Professor Schaller became DMLC’s third president, following Otto Hoyer. During his 15-year tenure, women were admitted to the college (1896), telephones were installed in New Ulm (1897), student teaching became a requirement, a Turnhalle was built for physical education (1901), the music curriculum was set, and the first basketball team was organized (1906). In 1897 “Hermann the German” was dedicated in the city of New Ulm; perhaps the Schallers were among the 24,000 people at the event.

In 1908, the Schallers left New Ulm for Wauwatosa, Wisconsin, where John replaced Adolf Hoenecke as professor and president of Wisconsin Lutheran Seminary. During his tenure, Schaller, along with his colleagues August Pieper and J.P. Koehler, guided the synod through several doctrinal controversies. Their method—establishing doctrine through the careful exegesis of the Greek and Hebrew texts of Scripture—has been called the Wauwatosa Theology.

A prolific writer, Schaller served as editor of Lutherische Schulzeitung (Lutheran School Newspaper) and published several books: an isagogics textbook in both German and English (Kurze Bibelkunde and The Book of Books), Pastorale Praxis (Pastoral Practice), and Biblical Christology.

Well-respected for his enlightened leadership, his scholarship, and his fatherly pastoral approach, Johannes Schaller died of influenza in 1920.