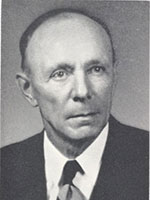 President Erwin E. Kowalke (1887-1973) was called to Northwestern College in 1913 to teach English and serve as the college’s first athletic director. The next year Hebrew was added to his duties, and he continued to teach English and Hebrew for 53½ years. In 1919, he became the college’s fourth president, a role he filled until 1959. As the country suffered through the Depression and World War II, Kowalke kept the college on course. By the end of his tenure, this faithful servant, known to his students as EEK, was said to have trained more than 80% of WELS clergymen serving in the ministry.

The Northwestern College Alumni Society honors the NWC presidents through memorial scholarships. The Erwin E Kowalke Grant for Biblical Languages is awarded annually to a preseminary student based upon his academic achievement, campus citizenship and participation, potential for pastoral ministry, and excellence in biblical languages. Northwestern College served as the WELS preseminary college from 1865 to 1995, when it amalgamated with Dr. Martin Luther College to form the present Martin Luther College.