The Altar of Revelation

The altar is the centerpiece of worship. It is made of wood and stone, like the altars familiar to Luther and the reformers, the wood recalling the cross and the stone pointing to Christ the Rock.

Now, take a closer look. The design of the altar takes its cue from Revelation 5, which describes how St. John peeked into heaven. In that vision the Evangelist saw the Trinity:
• the Father as a hand holding a scroll,
• the Son as the Lion of Judah, and
• the Spirit as seven eyes and seven horns.

These three symbols are painted on the front of the altar in trompe l’oeil, a technique that here simulates carved stone.

The symbol of Jesus as the Lion is not only rare, but in John’s vision it does an amazing trick. The Lion turns into a Lamb! So too a lamb in wood mosaic, “looking as if it had been slain” (Revelation 5:6), appears on the altar’s mensa (table top). Four languages—Greek, German, Latin, and English—say, “Look, the Lamb of God” and “Finished.”

Four Greek crosses in South American bloodwood appear in the corners. Look closely. A fifth cross is hidden on the Lamb. Or is it? Can you find it?

Look again. Shapes and numbers tell the story of salvation. The Lamb, placed in a field of African wenge, an ebony-like wood, is framed by a mandorla. The almond-shaped mandorla, made of South American bloodwood and Australian lacewood, is created by two intersecting circles, recalling our Lord’s two natures—how two worlds, divine and human, converge in his person. On either side of the Lamb are ten small red squares of bloodwood to represent the Ten Commandments. (Inspect the grain of the red squares. Find the three with vertical grain symbolizing our duty to God, and the other seven with horizontal grain recalling our duty to each other.) Ringing the squares are triangles representing the Trinity. The message: God’s Son shed his blood in atonement for all sins committed against God and man. 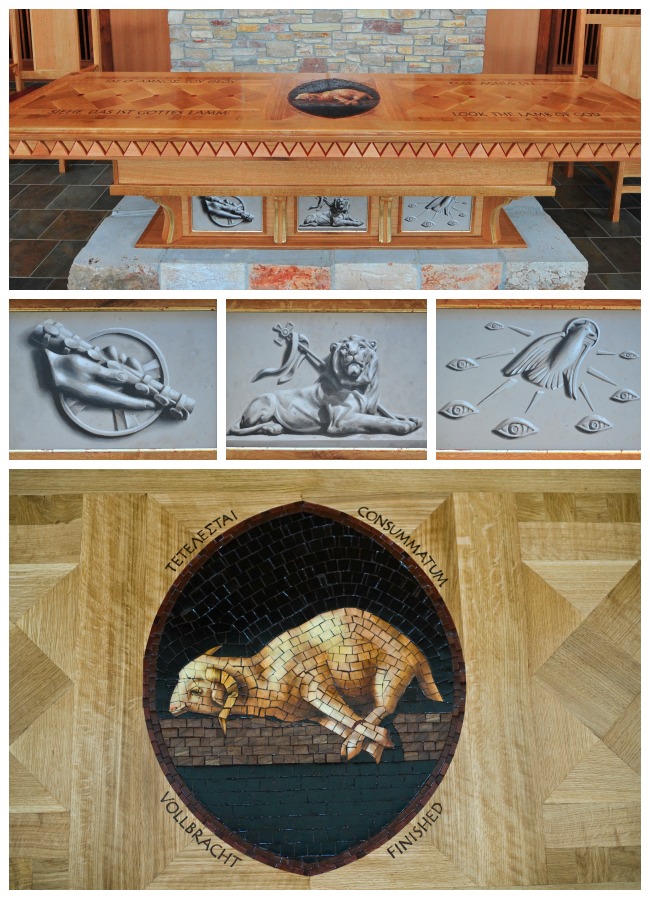