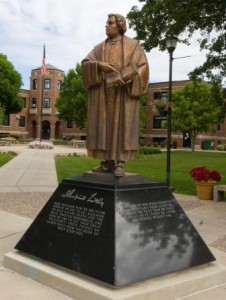 To help celebrate the 130th Anniversary of WLS in 1993, a statue of Martin Luther was chosen to witness the seminary’s unwavering commitment, under God, to the Reformation’s theological foundation of Sola Gratia (grace alone), Sola Scriptura (Scriptures alone) and Sola Fide (faith alone). The Board of Control of the Seminary appointed an eight-member committee to gather private gifts and execute an appropriate statue

of Dr. Luther. The committee in turn engaged the Conrad Schmitt Studios of New Berlin WI to take charge of the construction of the statue. A hexagonal pedestal three feet tall was to be the base of a six-foot statue, and on the sides of the base were to be six bronze plaques with quotations from Luther’s writings reflecting his theology. (See “130th WLS Anniversary” folder.) The Schmitt Studios began with exhaustive research into various images of Martin Luther. A charcoal sketch of the reformer was made and artisans then sculptured an 18-inch clay model. Sight adjustments were made to Luther’s pose and clothing. After a full-size model was made, the statue was cast in a single pour at the Pante Studio in Ortisei, Italy. (See Conrad Schmitt Studios, Inc., webpage.)

When the statue was erected, the original hexagonal pedestal was replaced with a five-sided pedestal. It was faced with “Absolute Black” granite slabs inscribed with the statue’s identification, seals, and quotations of Luther. The cost was approximately $75,000, much of which was donated by WLS alumni over a period of several years. The statue was dedicated on November 1, 1992, in conjunction with a Reformation festival service in the seminary auditorium. (Source: Correspondence with Professor John Hartwig) 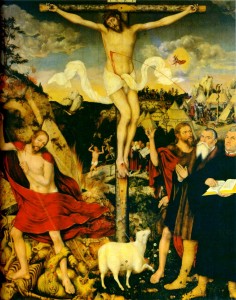 In 1994 the Northwestern College Board of Control resolved to commission two bronze statues of Martin Luther, approximately seven feet tall, and to design a base for each. President John Braun selected a pose of an image taken from a triptych painting on display at Saints Peter and Paul Church in Weimer, Germany. It was painted by Lucas Cranach the Elder and completed by his son in 1555 (Source: Professor David Gosdeck, MLC Library Director).

The estate of Dr. Heinz Bluhm (NWC 1928) provided money for the Luther statue on the campus of Northwestern College.

The statue on the campus of Martin Luther College is a gift from the Board of Control of Northwestern College from non-budgetary funds under its control. (Source: Book of Reports and Memorials for the Fifty-Third Biennial Convention of the WELS, page 16 and correspondence from John A. Braun, NWC President) A sketch of the statue was included in the correspondence.

The Watertown campus statue was dedicated at the 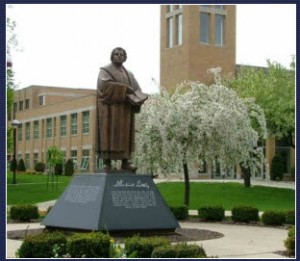 The New Ulm campus statue was placed at the end of the campus mall near the north entrance to the new administration/science building (the Link) without dedication or ceremony on August 10, 1995, just before the opening of the amalgamated Martin Luther College. (Source: The New Ulm Journal, August 11, 1995) 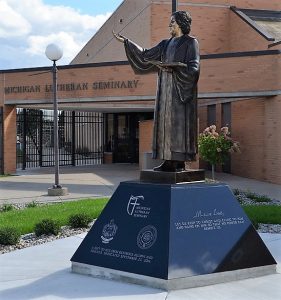 In anticipation of the 500th anniversary of the Lutheran reformation, a private group of supporters raised funds to erect a Martin Luther bronze statue on the campus of Michigan Lutheran Seminary in Saginaw. It was installed on September 23, 2016 and stands at the main entrance to the school on Hardin Street.

The four statues are similar in appearance and represent the tie between the Wisconsin Evangelical Lutheran Synod’s four ministerial education schools. The statues also relate the schools’ and synod’s common commitment to carrying on Luther’s work of preserving God’s word in its truth and purity – spreading its light from age to age.

The inscriptions on the pedestal of the statue on the campus of Martin Luther College read as follows:

Now we know how we are to die, whence we are to go, also how we may escape death and the devil, who has redeemed us, and how we are to get these great treasures.  These things we learn only from this book of Holy Scriptures.

Therefore, he who would correctly and profitably read Scripture should see to it that he finds Christ in it; then he finds life eternal without fail.

A gift from the Northwestern College Board of Control to Martin Luther College.

Let us ever keep this in mind, we shall have a hard time preserving the gospel without the languages.The languages are the sheath in which this sword of the Spirit is contained; they are the casket in which this jewel is enshrined.

LW 45:360.   Martin Luther, To the Councilmen of All Cities in Germany That They Establish and Maintain Christian Schools (1524).