The preseminary curriculum at Martin Luther College prepares men to enroll at Wisconsin Lutheran Seminary. This course of study stresses foreign languages. Hebrew and Greek, required of all students, are the original languages of Scripture.  Students choose a non-biblical language to complete the language requirements.  In addition, the curriculum includes a selective liberal arts emphasis, with special attention given to literature and history. 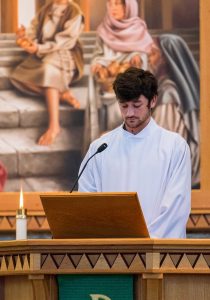 To provide an opportunity for men who are older than traditional college students to prepare for the pastoral ministry of the Wisconsin Evangelical Lutheran Synod, Martin Luther College offers the Seminary Certification Program.  Click here for more information.

After taking Elementary Classical Greek I and II, some students will continue in Classical Greek and some will shift into Koine Greek, based on achievement and the recommendation of the Greek professors.

Another Spoken Language – 12 Credits
A student may also fulfill the non-biblical language requirement with achievement in another living language. A student choosing this option must furnish an official college transcript verifying six college semesters of another spoken language or must provide other recognized verification that demonstrates the equivalence of six college semesters.
Other Subject Areas

In addition to the general education and language requirements, students must take additional courses, both required and elective, from other academic areas to complete the liberal arts degree. Click here for the menu of courses.

Martin Luther College has been approved to participate in the National Council for State Authorization Reciprocity Agreements.