Then the LORD said to Moses, “Make a bronze basin, with its bronze stand, for washing. Place it between the tent of meeting and the altar, and put water in it.”
(Exodus 30:17-18)

He saved us, not because of righteous things we had done, but because of his mercy. He saved us through the washing of rebirth and renewal by the Holy Spirit.
(Titus 3:5) 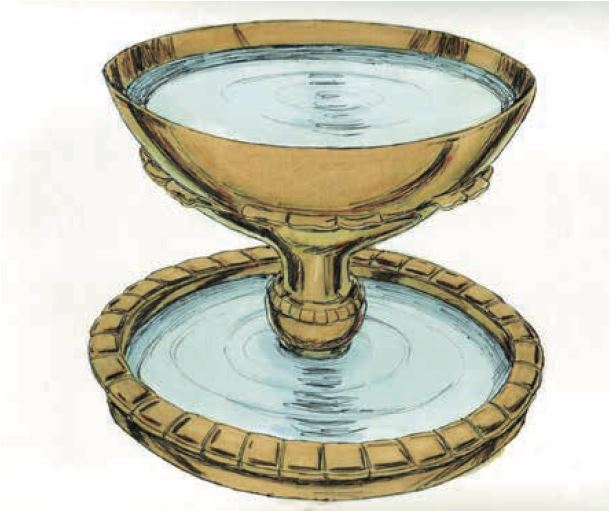 Our God pays attention to details. We see them in Israel’s tabernacle, that “Tent of Meeting” in which God lived symbolically among his people during their bumpy, twisting, 40-year journey from Egypt to the Promised Land. God’s Spirit flooded the last 16 chapters of the book of Exodus with details about the tabernacle. There the Lord laid out a blueprint for the hub of Israel’s worship life, including the finer features of both the tent itself and its courtyard.

God meant this tent and its grounds as something far more than mere space for ceremonies and shelter for services. With an artist’s sense, an architect’s feel, and especially with a Father’s love, God directed Israel to build into their mobile worship center details that reminded them of—and strengthened them in—their relationship with him. On purpose—God’s purpose—those details taught both law and gospel to his people.

They still do. Consider the basin. It stood outside the tabernacle in the courtyard, the second thing—after the altar of sacrifice—that one would see after passing through the curtain that enclosed the sacred courtyard. We don’t know its size. Still, even though it was bronze, it was—like all else for wandering Israel—portable. Compare it to a washstand.

Which gets to its purpose. It held water. By God’s command, Israel’s priests had to wash their hands and feet at the basin, both before stepping into the tabernacle proper and before offering sacrifice on the altar. The washing ceremonially cleansed them for close contact with God. The command to wash made clear that the priests, even the high priest, were dirty sinners, and by extension the people were filthy too. The ritual confronted them all with the sad fact that no unclean person could stand before the holy God.

But hand in hand with that reminder was God’s gracious way of addressing the problem of their sin. He had ordered the basin. He had attached to it his promise of cleansing. The basin was one more representation of—and result of—the promise God had made to bless them and all nations with the Savior.

The basin gave the faithful of Israel a glimpse ahead to the washing away of all sins that Jesus would accomplish. Our thoughts move from this basin to another, the baptismal font, where the Holy Spirit’s miracle of plain water and powerful Word creates faith in Jesus and the washing he accomplished. His blood washes away our sins. His blood enables us to stand clean before our God. Only his blood can cleanse our souls.

Smudged by sin’s dirt? Stained with its grime? Come to a brimming basin. Wash in Jesus’ blood. Be clean. You are forgiven of every sin. In every detail.

Rev. Daniel Balge serves Martin Luther College as a professor of Greek and Latin, and as academic dean for preseminary studies.