[The LORD said to Moses,] “Then have them make a sanctuary for me, and I will dwell among them. Make this tabernacle and all its furnishings exactly like the pattern I will show you.” (Exodus 25:8-9)

The Word became flesh and made his dwelling among us. We have seen his glory, the glory of the one and only Son, who came from the Father, full of grace and truth. (John 1:14) 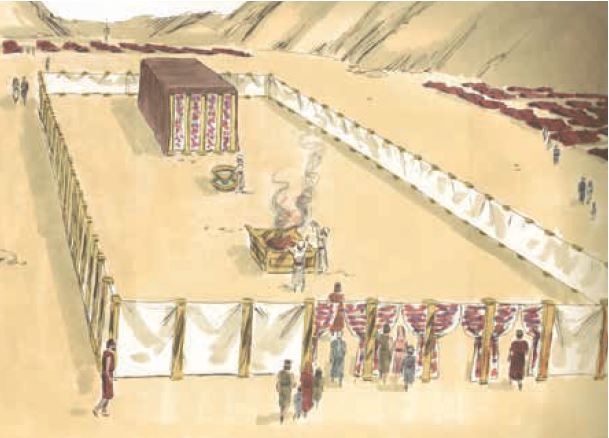 In the beginning, God created the heavens and the earth. His infinite love caused him to use his infinite power to create a wondrous, majestic universe. He created the earth so that he could dwell there with those he created. He placed Adam and Eve in the Garden of Eden to enjoy his blessings in perfect fellowship with him. And it was very good.

That goodness was soon gone. Satan, in the form of a serpent, slithered into the Garden, and Adam and Eve were ensnared by his schemes. Sin and death stuck their ugly heads into human existence, and the perfect relationship between God and humanity was destroyed.

God is a God of infinite justice. “The wages of sin is death.” The first half of Romans 6:23 states a universal principle more unalterable than any law of the Medes and Persians. The God of infinite justice, however, is still the God of infinite love. Already in the Garden, before our first parents were expelled, our loving Lord gave them a promise that he would undo the tragic consequences of their actions. And the rest is history. Salvation history. That fulfilled history is why there is a second half to Romans 6:23: “but the gift of God is eternal life in Christ Jesus our Lord.”

During the Exodus, after God had rescued his people from slavery in Egypt, he instructed Moses to have the Israelites build a tabernacle for him. This portable sanctuary was to be constructed, along with all of its furnishings, according to the blueprint God himself would provide. As we journey with Jesus through this Week that we call Holy, each day will give us the opportunity to stop and unpack the meaning of one of those furnishings. On this first day of the week, let us marvel at the fundamental truth that God built into the tabernacle: “I will dwell among them.”

That is grace. The God of the universe chose to live with his people in a tent, as the Israelites did. He truly is Immanuel (Isaiah 7:14), “God-with-us.” That presence of God with his people reached a climax when, as John put it in the prologue to his gospel, “The Word became flesh and made his dwelling among us.” In his incarnation, Jesus became one of us—true God and true man, fully human and fully divine—and “tabernacled” with us so that he could satisfy God’s infinite justice by taking our place, living the perfect life that we could not and dying on the cross to pay the wages of our sin. What wondrous love is this!

Gracious Father, as we enter into Holy Week and journey with Jesus to Jerusalem, into the Upper Room, on to Calvary, and finally to the empty tomb, bless our meditation and worship. Open our eyes of faith to see our Savior in the Old Testament tabernacle and furnishings and to rejoice that he dwells among us. In his name we pray. Amen.

Rev. Dr. Lawrence Olson serves Martin Luther College as a professor of theology and as director of the Staff Ministry Program and Congregational Assistant Program.