Then I looked, and there before me was the Lamb, standing on Mount Zion, and with him 144,000 who had his name and his Father’s name written on their foreheads. (Revelation 14:1) 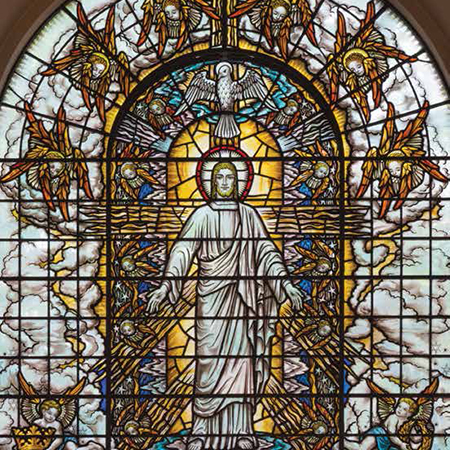 At first, the scene doesn’t fit our notions of a victory celebration. No flags, no fireworks, no tickertape parade. But make no mistake. John presents to us a scene of total victory. Eternal victory—and perfect peace and forever hope. The victor stands with those he rescued. Casual observers might not comprehend the brutality of the warfare now ended nor the power required to conquer. After all, they’d never equate victory with a lamb, a creature known for fleece, not fangs. Yet 30 times in his inspired Revelation, John mentions the Lamb. The Lamb is the main character. Not the dragon. Not the beast of the sea. Not the beast of the earth. The Lamb.

John knows the Lamb well. In his gospel, he reveals that Jesus is the Lamb of God, who takes away the sin of the world. Here, in his Revelation, he depicts the epic war fought by the Lamb. It was and remains a heinous conflict with no quarter given. Satan, the forces of hell, and the hellish allies of a wicked world seek to destroy the Lamb and his flock. Yet, again and again, with vivid imagery, the Spirit reminds us that Christ and his Church are victorious. It’s not even close. The Lamb wins.

We are stunned as we comprehend the sight: the Lamb standing, victorious, on Mount Zion. So weak, so helpless. Indeed, looking as if it had been slain. But now alive! His death was not a defeat. His death brought an irreversible victory. His death crushed Satan and all demons. His death emasculated the fury of a wicked world and hardened unbelievers. His death is the only ransom for your soul and mine. The Lamb lives, proof positive of his triumph on our behalf. We are safe with the Lamb. Safe from the Father’s fury over our sin. Safe from the torment of a guilty conscience. Safe from the serpent’s attacks. Safe from the sting of death. Now, in Jesus, death is but a doorway into glory.

So, together with all the elect of God, we stand with the Lamb and share the triumph. We stand having his Father’s name and his own name, the Name at which every knee will bow, written on our foreheads. We stand with the great multitude that no one could count, from every nation, tribe, people, and language, standing before the throne and in front of the Lamb.

This Lamb comes to you and me without fanfare, but in the power of the Spirit through the means of grace. He comes and does not frighten. Indeed, the Spirit brings us close, and gives us hands of faith to lift this Lamb to our hearts. He lives. We live.