Tuesday – Led in Silence, the Lamb 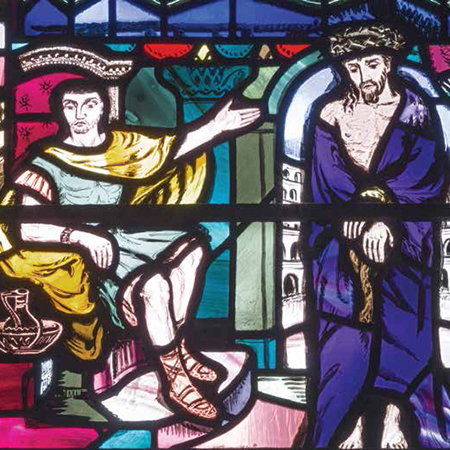 The high priest stood up before them and asked Jesus, “Are you not going to answer? What is this testimony that these men are bringing against you?” But Jesus remained silent and gave no answer.

“He has spoken blasphemy! He is worthy of death.” Then they spit in his face and struck him with their fists. “Are you the king of the Jews?” Pilate asked. “Yes, it is as you say,” Jesus replied.

Pilate asked him, “Don’t you hear the testimony they are bringing against you?” But Jesus made no reply, not even to a single charge—to the great amazement of the governor.

King Herod plied Jesus with many questions, but Jesus gave him no answer. So Herod and his soldiers ridiculed and mocked him and sent him back to Pilate.

Then Pilate said, “Don’t you realize I have power either to free you or to crucify you?” Jesus answered, “You would have no power over me if it were not given to you from above.”

Would you have kept your cool? Would you have responded with silence and grace? With calm and composure? Not me. I would have cursed and sworn and responded with an angry tirade if I had been treated like Jesus was. Threaten me . . . and I’ll threaten you. Cut me off . . . I’ll let you know. Question my authority . . . I’ll put you in your place. So often, in so many ways, I match “sin for sin.” We all are guilty as charged. How desperately we need a sinless substitute—someone to face the trials of life with truth and love.

It wasn’t that Jesus said absolutely nothing. He did respond with the truth when asked directly. He explained who he was. But he didn’t resist the sham and the shame and the mockery. He didn’t lash out. He didn’t attempt to defend himself against the gross injustice. Centuries before Jesus endured disgrace in our place, the prophet Isaiah pictured the image of our Savior as a lamb. Quiet obedience and submission characterized Jesus as he was “led to slaughter.” The sinless “Lamb of God” was not subject to death. The sacrifice of Jesus had to be unjust. But its purpose was perfection—life for life.

Some years later, an Ethiopian asked the evangelist Philip, “Tell me, please, who is the prophet Isaiah talking about, himself or someone else?” Then Philip began with that very passage of Scripture [our devotion verse from Isaiah 53] and told him the good news about Jesus. Indeed, God so loved the world that he gave his one and only Son!

A Lamb goes uncomplaining forth, our guilt and evil bearing and, laden with the sins of earth, none else the burden sharing. Goes patient on, grows weak and faint, to slaughter led without complaint, that spotless life to offer, bears shame and stripes and wounds and death, anguish and mockery and says, “Willing all this I suffer.”
(CW 100)

For this I thank and praise you, gracious Savior. Amen.