Monday – In Egypt, the Lamb

The animals you choose must be year-old males without defect, and you may take them from the sheep or the goats. Take care of them until the fourteenth day of the month, when all the members of the community of Israel must slaughter them at twilight. Then they are to take some of the blood and put it on the sides and tops of the doorframes of the houses where they eat the lambs. (Exodus 12:5-7) 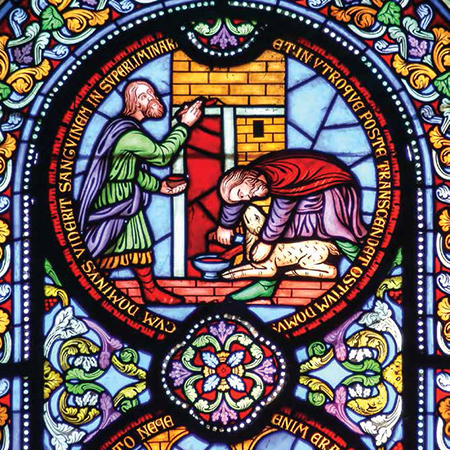 The tenth, last, and most terrible plague was about to strike Egypt. Egypt’s king, the Pharaoh, had been warned. Through Moses God had made clear: every firstborn male, human or animal, in every Egyptian household would soon die. Egypt would echo with “wailing . . . worse than there has ever been or ever will be again,” all because Pharaoh would not let God’s people go from the slavery in which they had toiled for centuries.

Understand that Egyptians were no more sinful than Israelites. The enslaved descendants of Jacob were sinners too, just as worthy of death. Moreover, few Egyptians had any influence on their stubborn Pharaoh or anything to do with his refusal to release Israel. Yet they would suffer. There was not a person, Egyptian or Israelite, who was not at risk from the angel of death.

But the Israelites would be spared. God directed each household to prepare a meal of an unblemished male lamb or kid (young goat). This meal was an act of worship; the lamb or kid was a sacrifice. Eating it as a community was an expression of their fellowship among themselves and with their God. Most important, they were to daub the doorframes of their houses with blood from the slaughtered animal. This blood would mark their home as Israelite and them as God’s people. The angel of death would pass over their household.

They and their children’s children’s children would always remember and would annually celebrate the event as “Passover.” As well they should. It triggered their escape from Egypt and was a pivotal event in God’s preserving both his people and his promise of the world’s Savior.

In and of itself, there was nothing special about the sacrificial lamb. To be sure, it was to be without flaw, a prime specimen, but it was still just a lamb. What made it special was the promise God attached to the lamb, that he would accept the sacrifice and forgive their sins because of his grace. Moreover, that lamb, and the thousands and thousands of Passover lambs sacrificed across hundreds and hundreds of years, all pointed ahead to Jesus, the unblemished Lamb of God, who by his sinless life and death would take away the sins of the world. On the basis of Jesus’ future, perfect sacrifice for all, God indeed forgave the sins of his people.

And still does. Our faith rests on the truth that God’s Son, the perfect Lamb, paid for our sins on the last true Passover, a very Good Friday. He shed the blood that marks you and me. And death passes over us.

Jesus, Lamb of God, thank you for your precious blood that marks my soul and rescues me from death. Amen.