PALM SUNDAY – ﻿On the Mountain, the Lamb

Abraham looked up and there in a thicket he saw a ram caught by its horns. He went over and took the ram and sacrificed it as a burnt offering instead of his son. So Abraham called that place The Lord Will Provide. And to this day it is said, “On the mountain of the Lord it will be provided.” (Genesis 22:13-14) 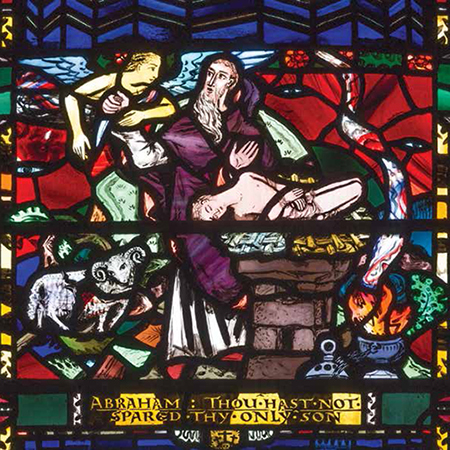 Rosh Hashanah, the Jewish New Year, begins ten days of repentance that culminate in the High Holy Day of Yom Kippur, the great Day of Atonement. Genesis 22 is read during Rosh Hashanah worship; references to the account that Jews call “the Binding of Isaac” appear throughout the liturgy that day.

Palm Sunday begins seven days of repentance that culminate in the High Holy Day of Easter, the great Festival of the Resurrection. As we journey with Jesus through this week, we will pause at key locations that allow us to see him as the Lamb of God. Our first stop, at Mount Moriah, is in Genesis 22. That chapter starts with a simple statement:

“Some time later God tested Abraham.” What a test that was. Abraham and Sarah had waited 25 long years for God to fulfill his promise to give them a son, and finally—when Abraham was 100 and Sarah was 90, both long past the normal age for having children—as he always does, God kept his word. Isaac was born, and Sarah’s laughter of disbelief (Genesis 18:12-15) was transformed into laughter of joy (Genesis 21:6-7). Isaac has now grown to be a young man, and God challenges Abraham with the ultimate test: he commands him to sacrifice Isaac as a burnt offering.

Abraham passed that test. Knife in hand, he was ready to do what God had commanded, when God intervened and told him not to lay a hand on his son. Not only did God prevent Abraham from sacrificing Isaac, God provided an alternative sacrifice. When Isaac had asked his father, “Where is the lamb for the burnt offering?”

Abraham told him, “God himself will provide the lamb.” He did, in the form of a ram whose horns had snagged in a dense tangle of branches. Abraham “took the ram and sacrificed him as a burnt offering instead of his son.”

“Instead of his son.” Ponder those four words. This is the first explicit mention in Scripture of the substitutionary sacrifice of one life for another, but that theme runs throughout the Old Testament and into the New. “The Lord Will Provide,” Abraham called that place. “On the mountain of the Lord it will be provided,” God’s people continued to say. Two thousand years later, God provided his Son, who redeemed humanity by sacrificing himself on a cross in a location very near where God had provided the sacrificial ram. Jesus allowed himself to be led like a lamb to the slaughter, he was silent before his accusers, and his blood atoned for your sins and mine. His sacrifice means that when you die, you will wake up in heaven just as assuredly as the eyes of Christ opened in the tomb on Easter morning.

Ride on, ride on in majesty!
The hosts of angels in the sky
look down with sad and wond’ring eyes
to see th’approaching Sacrifice.

Ride on, ride on in majesty!
In lowly pomp ride on to die.
Bow your meek head to mortal pain,
Then take, O Christ, your pow’r and reign.

Dr. Lawrence Olson serves Martin Luther College as a professor of theology and as director of the Staff Ministry Program and Congregational Assistant Program.