[The LORD said to Moses,] “Hang the curtain from the clasps and place the ark of the covenant law behind the curtain. The curtain will separate the Holy Place from the Most Holy Place.” (Exodus 26:33)

Therefore, brothers and sisters, since we have confidence to enter the Most Holy Place by the blood of Jesus, by a new and living way opened for us through the curtain, that is, his body, and since we have a great priest over the house of God, let us draw near to God with a sincere heart and with the full assurance that faith brings, having our hearts sprinkled to cleanse us from a guilty conscience and having our bodies washed with pure water. (Hebrews 10:19-22) 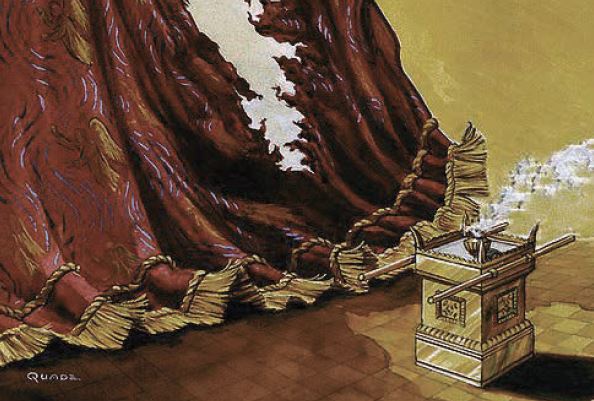 The words confidence and death don’t belong together. When one thinks of death, sadness and pain usually flood the mind. Outwardly, disease, aches, and a changing appearance signal an aging body that’s approaching death. It does not inspire confidence. Death has the opposite effect.

But there was a death that brought confidence. This death is what made a certain Friday good. In the story of Jesus, his death instilled confidence by destroying the thing that had stood in the way. It was the separation between God and us.

For years the separation between God and mankind was visibly represented by a magnificent curtain. It was a curtain made with the finest colors of blue, purple, and scarlet yarn, intertwined with twisted linen and overlaid with cherubim. The curtain was hung with gold hooks on four gold-covered wood posts standing tall on four silver bases.

Its purpose was to hide the ark of the covenant in the Most Holy Place where the Lord God dwelled. It prevented the priests who worked in the tabernacle—and later the temple—from confronting God’s glory. The curtain symbolized God’s demand for perfection and the fact that sinful humans couldn’t even exist in God’s presence.

For years, only the sacrifice of a lamb would allow the priest to push back the curtain and stand in God’s presence. But on the first Good Friday, the curtain was removed. It wasn’t just pushed aside. It was torn completely in two. As a life of perfection cried out and was ended, now anyone could enter the Most Holy Place. Jesus’ blood removed the separation between God and mankind forever. Now there was confidence for all to enter and stand face to face with God.

But gloriously, even though the sinful part of you tries to retain that separation, the curtain pieces remain torn in two. The separation between God and mankind is gone forever. Jesus’ actions on the cross assure you that your heart is cleansed and confident.

Day to day and season to season, you can confidently point to what Jesus did on the cross to reunite you with God. Rejoice in that. It’s Good Friday today, but every day is good. Because of him, separation is gone forever. Keep this confidence at the forefront of your mind as you march on toward the day when you will be fully reunited with Jesus.

Dear Lord, as a person who deserves to die and be separated from you forever, I know that your death today means confidence for me. Let me continue to draw near to you this Holy Week and all my life on account of your death for me. Amen.