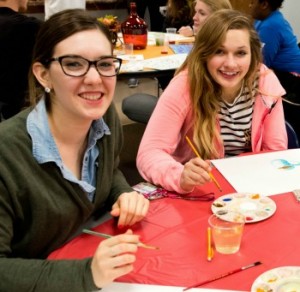 A new club has appeared on campus: Art in Ministry, also known as AIM. To introduce themselves to the rest of the student body, AIM recently hosted an event they called “Treats & Tempera.”

Students like John Marquardt (Shoreland / Garden Homes-Milwaukee WI) enjoyed this night of snacking, socializing, and most importantly, painting. “It was a great opportunity for people to have fun and unwind in a creative way,” he says.

AIM’s president Grace Williams (Cyprus Creek HS / Abiding Word-Houston TX) and the other club members were thrilled with how the night went. “Forty-five people showed up, which was great!”

AIM has big plans for the future. “As a club, we want to provide an opportunity for people to use the gifts God gave them and to create works for campus,” says Grace. “We’re also working toward getting an art minor and expanding our artwork to local churches as well.”

Ambassadors – The Face of MLC
Scroll to top