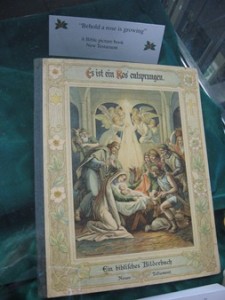 The library holds hundreds of rare children’s literature books. Some of these came from Northwestern College, Watertown, Wisconsin, which during the 19th century had a teacher education program. Others came from the collections of Dr. Martin Luther College. Some were gifts to the college. The core of the collection centers on religious children’s books published by German-American Lutheran publishers, the bulk of those were published by the Northwestern Publishing House. Most of these books were published during the last quarter of the 19th century and the first quarter of the 20th century.

Rare Books are now searchable in the MLC/TdS Online catalog.