The Martin Luther College Library received this 5/8 scale model of the Gutenberg Press from its builder, Art Paquay in 2006. 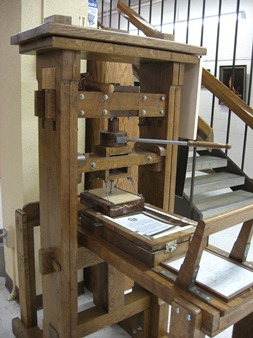 Johannes Gutenberg, a German goldsmith, invented the printing press, with replaceable type in 1436. The famous, Gutenberg Bible was published in September 1452 and was the first book to be published in mass. Gutenberg’s press lowered the cost of books enough to make them available to the masses and is probably the impetus of lending libraries. The Gutenberg Press remained the standard until the early 20th century.

This scale, model press, was built by Art Paquay, a New Ulm native, and assisted by Linus Guggisberg, making the screw and nut, with Kevin Schafer providing printing cut and information.